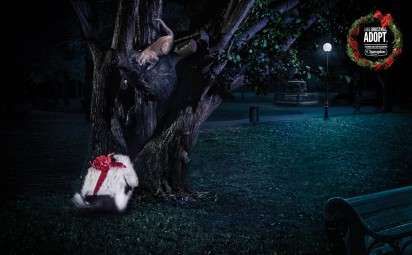 The Champion Dog Campaign Urges People to Adopt This Christmas

Meghan Young — April 12, 2013 — Fashion
References: ibelieveinadv
Share on Facebook Share on Twitter Share on LinkedIn Share on Pinterest
Puppies are adorable in nearly every shape and size they come in, even boxy ones like those found in the Champion Dog campaign. Of course, these are not normal canines. Instead, they have been depicted as presents, complete with bows and all, to illustrated the tag line, "This Christmas adopt." Interestingly, these 'presents' aren't placed under the tree just yet. Instead, they are in the streets hoping for a warm home.

The Champion Dog campaign was conceived and executed by Porta, an ad agency based in Santiago, Chile. Art directed by Manuel Manquepi and Sebastián Campos with creative direction by Mariano Pérez and Gonzalo Baeza, the images were shot by photographer Sotelo and retouched by the Gorila Estudio. In general, the Champion Dog campaign relies on good-will and sentimentality to reel people in.
2.2
Score
Popularity
Activity
Freshness
Access Advisory Services