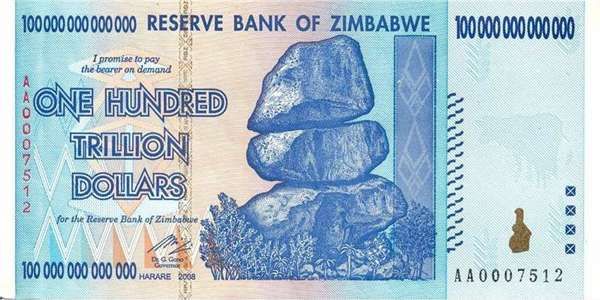 Zimbabwe's $100 Trillion Bill is Selling Like Hot Cakes on eBay

Jason Soy — May 27, 2011 — World
References: online.wsj & neatorama
Share on Facebook Share on Twitter Share on LinkedIn Share on Pinterest
Imagine how easy negotiations with Dr. Evil would be if he asked for a ludicrous amount of money and we paid him with a single $100 trillion bill. And no, it’s not Monopoly money either, this excessively large legal tender is legitimate and is Zimbabwe’s highest denomination.

If we were to get technical, many citizens of Zimbabwe are actually trillionaires, but that doesn’t mean much since the Zimbabwe dollar is all but abandoned as national currency due to runaway inflation. Foreign currencies such as the American dollar are now the accepted legal tender of the people of Zimbabwe. Still, with that many zeros behind a dollar sign, I’m sure even Bill Gates would have been bug-eyed.

So how much would it cost for you to own your very own $100 trillion bill? Well, you can actually pick one up on eBay for a modest $5.