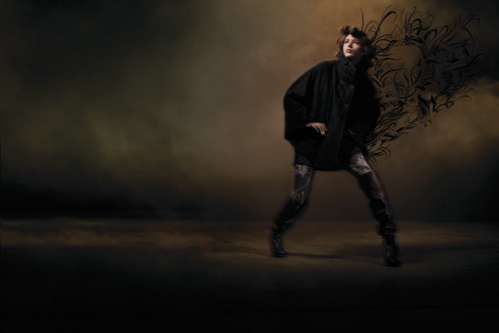 The Salon des Creatures Series is Dark and Dramatic

Meghan Young — August 29, 2011 — Fashion
References: danielsommer.eu & behance.net
Share on Facebook Share on Twitter Share on LinkedIn Share on Pinterest
It appears that illustrating on top of fashion photography, such as that seen in the Salon des Creatures photo series, is becoming quite popular among photographers and fashion labels. These illustrations provide a cool use of creativity and imagination, both on the side of the creators and the viewers. Not only that, but it must also require much less production and money to execute, making it a huge plus.

Shot by Germany-based fashion photographer Daniel Sommer, the Salon des Creatures photo series was illustrated by Johannes König. Dark and dramatic, this shoot is made especially eerie thanks to the drawings that seem quite devilish, even though they are mainly inspired by nature. Salon des Creatures was styled by Alexandra Dietl.
6
Score
Popularity
Activity
Freshness
Get Better and Faster