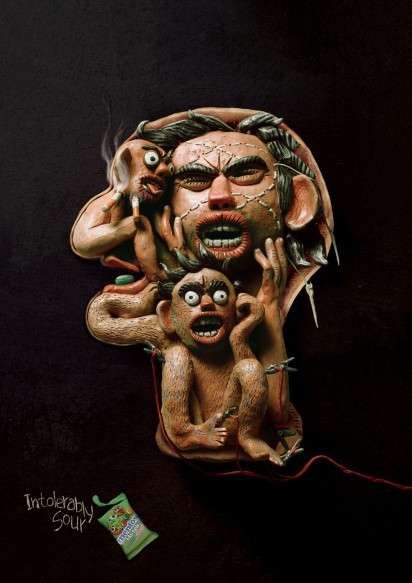 Meghan Young — March 8, 2012 — Marketing
References: ogilvy & ibelieveinadv
Share on Facebook Share on Twitter Share on LinkedIn Share on Pinterest
The Mentos Sour Marbels campaign shows that this candy is so tart, it will torment every single side to a person's persona. This is represented by a troop of mini men that have been illustrated inside a person's head. Smushed together as though they were performers in a clown car, these voodoo-looking men are embedded with nails, clipped with pliers and wrapped in barbed wire.

Created by Ogilvy & Mather, an ad agency based in Mumbai, India, the Mentos Sour Marbels campaign might be disturbing, but that is clearly the point. People want to know just how effective the tartness of a sour candy is, and this campaign depicts it perfectly. It was illustrated by Deelip Khomane.
1.2
Score
Popularity
Activity
Freshness
Jeremy Gutsche Keynote Speaker