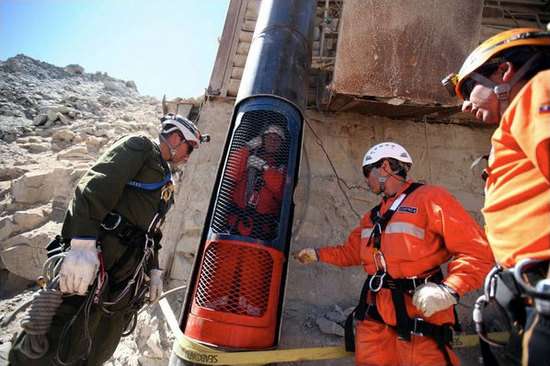 Meghan Young — October 14, 2010 — Lifestyle
References: nytimes & dvice
Share on Facebook Share on Twitter Share on LinkedIn Share on Pinterest
The Phoenix capsule arrived to rescue 33 Chilean miners, who have been trapped for over two months underground. On October 12, 2010, the first miner was lifted from the earth like a phoenix rising from the ashes to the joy of his wife, son and the millions who tuned in to the harrowing rescue.

Manufactured by a Canadian drilling company in Calgary, the Phoenix capsule is a 13-feet tall steel cage, capable of carrying one miner at a time for a 20-minute ride back up to the surface. Painted in Chile's national colors of white, blue and red, the Phoenix capsule will truly give new life to these saved individuals.
6
Score
Popularity
Activity
Freshness
View Innovation Webinars