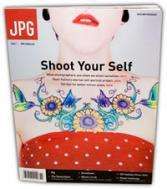 Going Like Sixty — November 28, 2006 — Tech
References: jpgmag & newassignment.net
Share on Facebook Share on Twitter Share on LinkedIn Share on Pinterest
"The founders of this bi-monthly magazine have given something different to the publishing world. This month's magazine relies entirely on user submitted photography," as reported on news-assignmentnet.net.
Founders are Derek Powazek and Heather Powazek-Champ.
â€œInstead of starting in print and building a community, you start online. Then when you launch your first copy, you have supporters there,â€ said Derek Powazek.

JPG was, in part, an expansion of a working idea called Photo Club â€“ a service that delivered an original photo once a month to subscribers. The Powazeks went online and named their endeavor JPG Magazine, â€œto honor all the fantastic work being put online that never saw the light of day in print.â€ They accepted digital submissions from anyone using all the digital tools at their disposal (gmail, flickr, lulu), selected the best and produced six issues over the next two years
1.5
Score
Popularity
Activity
Freshness
View Innovation Webinars

Modernized Technical Hiking Boots
The Vasque Torre AT GTX Has a Vibram Sole, GORE-TEX and More