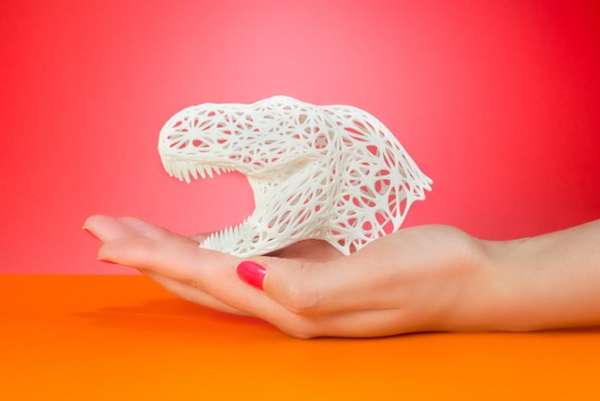 Meghan Young — July 16, 2013 — Art & Design
References: namisu & psfk
Share on Facebook Share on Twitter Share on LinkedIn Share on Pinterest
At first the 3D-Rex by namisu, a Spanish design studio, may look like a uniquely preserved fossil of a Tyrannosaurus' head. Yet almost immediately people will conclude that the intricate pattern was not created by nature. Instead, as its name suggests, it was made by men using 3D technology.

Whether placed on a table or mounted on the wall, the 3D-Rex by namisu makes an impressive presence in the home or office. The latticed surface makes the sculpture a work of art that begs to be put on display. According to the design team, "The concept represents a contrast between old and new, mixing nature’s own amazing creations with technological advances of today." It can be produced in different sizes.
1.7
Score
Popularity
Activity
Freshness
Get Trend Hunter Dashboard