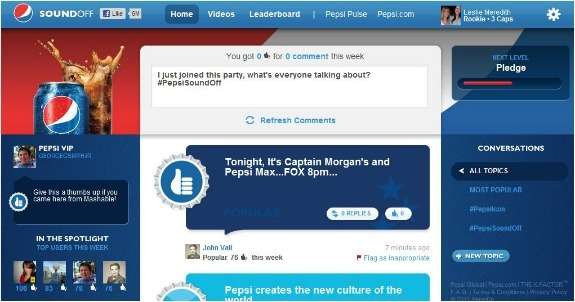 Katherinev123 — October 20, 2011 — Lifestyle
References: pepsisoundoff & technewsdaily
Share on Facebook Share on Twitter Share on LinkedIn Share on Pinterest
Lately, it seems as if Pepsi and Coke have been battling head to head when it comes to social media. The Pepsi Sound Off and Pulse sites are two new social networking sites recently launched by Pepsi to help promote the British talent show 'The X Factor,' which just debuted in the United States and features Simon Cowell and Paula Abdul.

The Pepsi Sound Off site is a place where fans can comment, share posts and earn rewards, says TechNewsDaily. Here, users can also participate in social games: fans earn what is described as "bottle caps" and receive status titles such as "rookie" or "ambassador" as they increase their participation. In contrast, the other site, Pepsi Pulse, functions more like Twitter -- it comprises a stream of viewer comments, along with tweets and Facebook posts.
2
Score
Popularity
Activity
Freshness
View Innovation Webinars