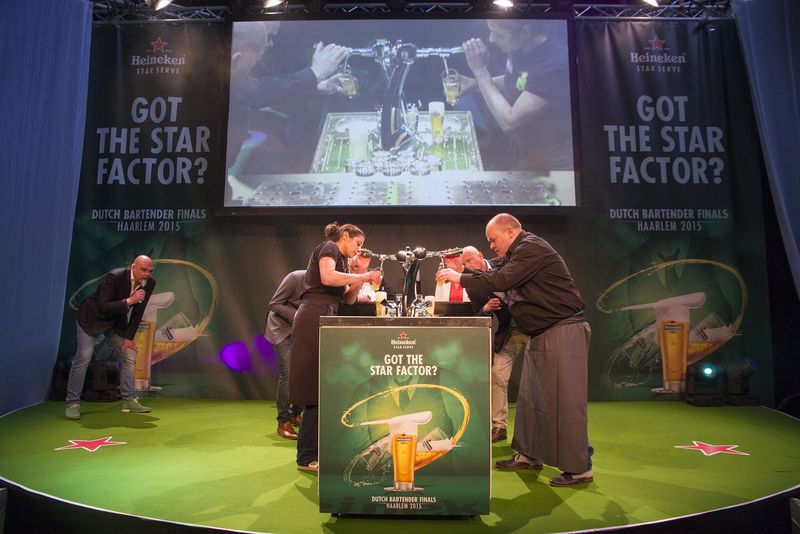 Gil Haddi — April 13, 2015 — Marketing
References: facebook & heineken
Share on Facebook Share on Twitter Share on LinkedIn Share on Pinterest
The finest bartenders from all over the world will be travelling to Amsterdam on April 22nd to take part in Heineken's Global Bartender Final 2015 where they will compete neck in neck in the hopes of being crowned the winner. So what does it take to have the perfect serve? I had the privilege of attending the 2015 Heineken Dutch Bartender Final to discover the thrill and the complexity of the Heineken standard.

Fittingly called the Heineken Star Serve, there are five key points to pouring the perfect pint. Franck Evers, a man who travels the world to impart his star factor on professional bartenders who want to take their pouring to the next level, gave me a personal lesson on the perfect pour. The spotlessness of the glass, the pour which starts from the first drip of golden Heineken, the skimming of the foam, the warm smile and ease of the bartender's demeanor and the final presentation all play a role in each bartender's score.

Taking place in a huge rustic warehouse, the 2015 Heineken Dutch Bartender Final swept me away with the enthusiasm of the crowd and excitement of the pour. As each bartender approached the dual-sided bar on stage, the music started to build, their friends and colleagues applaud in support, cameras zoom in to show the intense focus of the contestants and the judges analyzing every critical move, and the intensity builds. With such a great atmosphere and a pint of freshly poured Heineken in my hand, I couldn't help but get involved in the stakes, feeling the nervousness of those whose hands started shaking as they served and cheering along with the audience as the winners of each round were announced.

Even in such an intense and supercharged situation, one contestant stayed calm and collected throughout. Not once did her hand quiver as she poured pint after perfect pint. Her warm smile engaged the crowd as she expertly skimmed the foam so that it precisely along the Heineken star logo on each sparkling glass. And, when her name was announced as the Dutch finalist, it was no surprise that the room exploded in a roar of support for Saida Schipdam, one of only a handful of women entered in a contest dominated by men.

After her whirlwind of a win, amidst the photos and hand-shaking and hugs, I managed to get a moment with Saida and ask her about her strategy and thoughts on winning such a prestigious competition. When I asked her about her plan to win, Saida told me that she had just injured her leg and didn't even expect to win. "I've played with these guys before," she stated, "we're really good friends. My goal was to stay focused and give it my best because this is what I do." And while she's very good at what she does, Saida maintained a strong sense of friendship with her contestants the whole way, joking with them and reveling in their successes, demonstrating the strong patriotic camaraderie between the Dutch bartender community.

Judit Tothy Global Platforms Manager, Heineken International says, "The regional qualifiers here in the Netherlands had a great atmosphere and a competitive vibe led by the contestants and their enthusiastic supporters. In total, 34 contestants came from all corners of the country to claim the title of the Dutch best bartender, which was awarded to Saida Schipdam for her flawless performance. The quality of this year's entrants was extremely high across the board, all of them pouring the best beer beneath the watchful eye of the judging panel however it was Saida whose passion, skill and precision really shone. We're looking forward to the other winners from across the globe joining us at the home of Heineken in Amsterdam, when the much anticipated final takes place takes place and an overall winner of the Global Bartender Final 2015 is crowned."

After getting this glimpse into the world of perfect pours and overflowing lagers, I am beyond excited to be attending the Heineken Global Bartender Final 2015 on April 22nd. I'll be reporting the events live from Amsterdam on our Twitter and posting pictures on our Facebook and Instagram so join me then!
6.9
Score
Popularity
Activity
Freshness
View Innovation Webinars