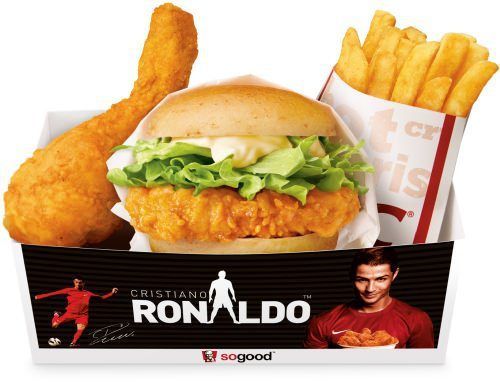 Laura McQuarrie — April 28, 2014 — Lifestyle
References: entabe.jp & en.rocketnews24
Share on Facebook Share on Twitter Share on LinkedIn Share on Pinterest
As of today, KFC Japan is offering the 'Ronaldo Pack,' a special chicken meal that celebrates none other than Cristiano Ronaldo, star of the Real Madrid soccer team. The limited Ronaldo Pack will include customizable options like fried or extra crispy chicken, fried fish or donut balls, which are a totally new menu item for KFC Japan.

On May 8th, KFC Japan will also be introducing another option, the Ronaldo One Box, which includes a piece of fried chicken, french fries, a small drink, as well as the customer's choice of sandwich.

After eating a meal at KFC, Ronaldo superfans will want to go online and enter their receipt number to check if they've won any Ronaldo-themed merch, like water bottles, which will be given away to 1,500 lucky fans.
3.9
Score
Popularity
Activity
Freshness
Get Better and Faster