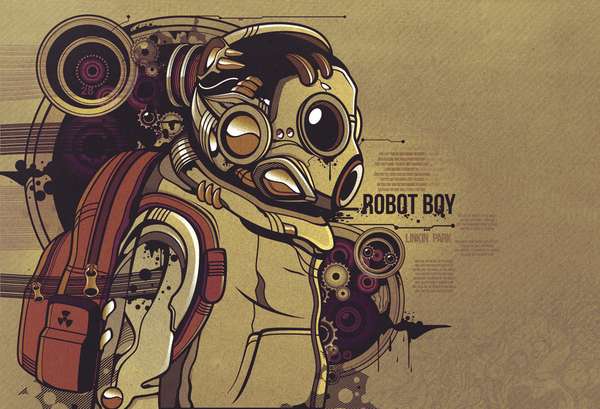 Jason Soy — April 5, 2012 — Tech
References: subjektzero.deviantart & cromoart.de
Share on Facebook Share on Twitter Share on LinkedIn Share on Pinterest
Aditya Permadi, better known by his alias SubjektZero, is a freelance illustrator and visual artist hailing from Surakarta, Indonesia. He specializes in urban street art, but rather than depicting standard concepts you’d normally see plastered on the side of a building, Permadi chooses instead to render all things robotic. The resulting images are an idiosyncratic and visually pleasing jumble of mechanical parts and highly organic lines.

For instance, one of Aditya Permadi’s illustrations features a robotic boy wearing a stylish hoodie. Though his head is comprised of components that look like a highly technical gasmask, the fashionable sweater compliments the busy elements of the boy’s cranium, thus creating an image that harmoniously blends synthetic with organic. The rest of Permadi’s portfolio is also comprised of similar visual treats.