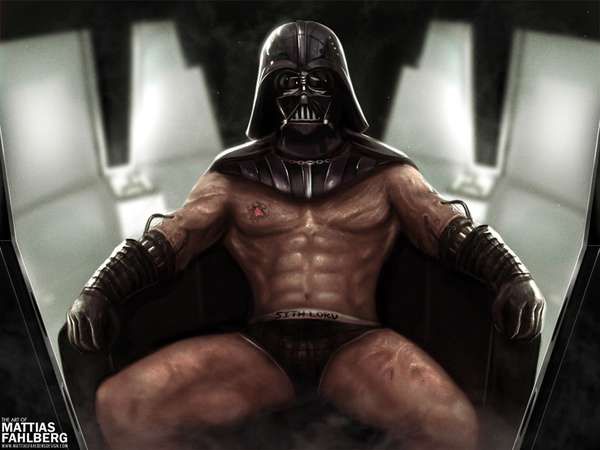 Jason Soy — March 28, 2012 — Pop Culture
References: mattiasfahlbergdesign & blog.thaeger
Share on Facebook Share on Twitter Share on LinkedIn Share on Pinterest
These Mattias Fahlberg illustrations depict a side to Star Wars characters that most people thought they’d never see in their lifetime. After all, who would have been able to anticipate that he or she would one day be staring at Darth Vader without his intimidating body armor, sitting in his personal chambers in nothing but his underwear, gloves, helmet and cape? Much more disturbing than this depiction of the fallen Jedi, however, is Fahlberg’s rendering of a hairless Chewbacca. With drooping peck muscles and a saggy gut, I think most viewers would prefer the Wookie with hair on his body than without.

Though Mattias Fahlberg clearly painted these pictures in good humor, he also included some stunning details to his pieces. Darth Vader’s skin is still noticeably recovering from burns he suffered decades ago and Chewbacca is sporting a hilarious “Wookiee” tattoo on his belly.