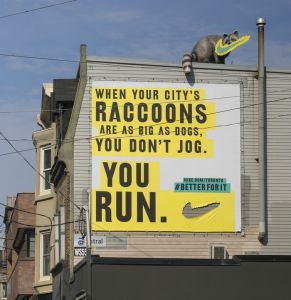 Meghan Young — May 6, 2015 — Lifestyle
References: nike & mediaincanada
Share on Facebook Share on Twitter Share on LinkedIn Share on Pinterest
As Nike Toronto gears up for the highly anticipated Women's 15k Race in June, a clever billboard campaign has been created for the city to encourage women to train even harder this spring season. Although it revolves around the larger Better For It campaign and the similarly named fitness challenge, it specifically targets local athletes in playful ways.

For instance, one of the Nike Toronto billboards reads, "When your city's raccoons are as big as dogs, you don't jog. You run." More than that, the billboards change depending on the time of day. Those running in the morning will see, "It's never too early to start," while those running in the evening will see, "It's never too late to start." Claire Rankine, communications director, Nike Canada, says, “[The #betterforit campaign] is our largest and most integrated women’s initiative to date. Our women’s business is outpacing men’s and tracking to $7 billion globally by fiscal year 2017.”
5.3
Score
Popularity
Activity
Freshness
Jeremy Gutsche Keynote Speaker