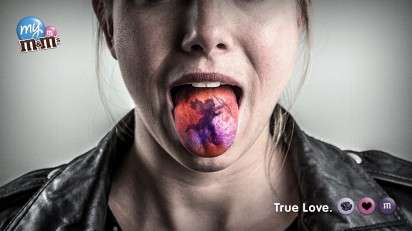 Meghan Young — August 7, 2013 — Marketing
References: acquitygroup & ibelieveinadv
Share on Facebook Share on Twitter Share on LinkedIn Share on Pinterest
Although there might be candy on the market that dyes tongues multiple colors more so than this particular one does, the M&M’s 2013 campaign is pretty playful. Instead of focusing solely on a slew of random colors on the tongue, it takes the concept a step further by showing how such candy reveals people's likes and hobbies. For instance, one girl is a believer in true love while another is a diehard Steelers fan.

The M&M’s 2013 campaign was conceived and executed by Acquity Group, an ad agency based in Chicago, United States. Almost a one man-show, it was creative directed, art directed and copy written by the multi-talented Kyle Stewart. The images were shot by photographer Matthew Downe, who allows the colors to stand out.
2.5
Score
Popularity
Activity
Freshness
View Innovation Webinars