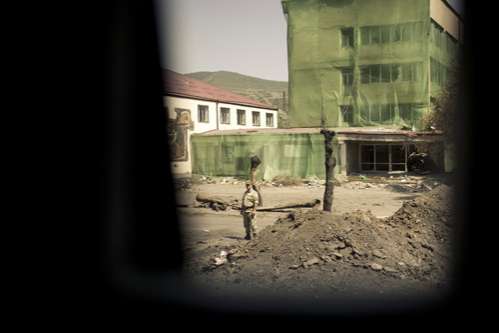 Corinne Guirgis — November 28, 2011 — World
References: larslindqvist & booooooom
Share on Facebook Share on Twitter Share on LinkedIn Share on Pinterest
The shiver-inducing pictures of photojournalist Lars Lindqvist adopt an unusual approach to the spreading of information that is both effective and artistic. His newest project, entitled 'The road to Tsinkvali,' is a telling travel diary of the state of the small Russian city, which is both heartwarming and thought-provoking.

Lindqvist is an artist touched by themes of war, peace, suffering and emotion, each of which reappear throughout his body of work, reaching into both the hearts and minds of his viewers. Having traveled all over the world for his work from Japan to Germany and elsewhere, he digs below the surface to capture the realest aspects of each of his subjects, some more heartbreaking than others.

While popular news media is often at risk of shedding a biased light on the situation in third world and war-torn nations, Linsqvist has taken it upon himself to shed light on the harsh realities in a way that incites reflection and inspiration among anyone who may come across his work.
2.7
Score
Popularity
Activity
Freshness
Get Trend Hunter Dashboard