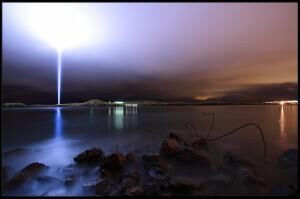 John Lennon said 40 years ago that he had a dream that one day a light tower called the "Imagine Peace Tower", designed by Yoko Ono, would become a reality. Today, that wish was fulfilled. The Imagine Peace Tower is a powerful light beam that goes straight up hundreds of meters in the air, making it visible from anywhere you stand in Reykjavik, the capital of Iceland. The light beam, which is as powerful as 2,000 normal home light bulbs, is powered with geothermal energy from Reykjavik Energy.

The Imagine Peace Tower symbolizes world peace, John Lennon's greatest dream and what he worked on most of his life. The light beam radiates from a wishing well with the words Imagine Peace engraved in 24 different languages. Surrounding the light tower are capsules containing over half a million written wishes collected from all over the world through Yoko's Wish Trees. Joining Yoko at the ceremony tonight was the couple's son, Sean Lennon and the former Beatle Ringo Starr with his wife.

The Imagine Peace Tower will be lit from today, John Lennon's birthday until Decemer 8th but John Lennon was shot and killed in front of his New York appartment that day in 1980.