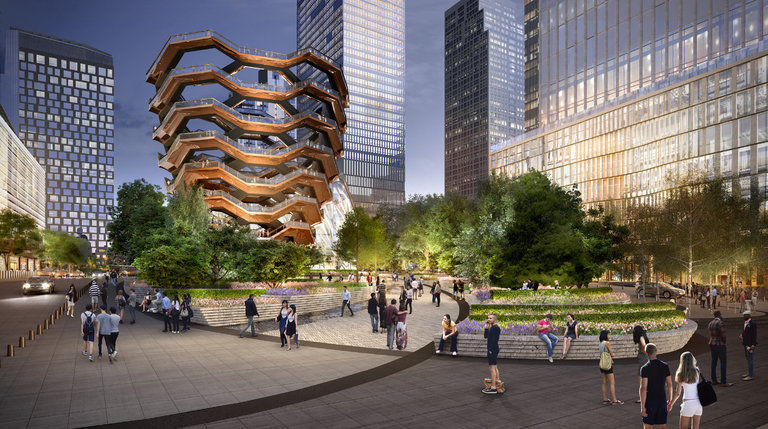 'Vessel' Will be a Towering Stairway in New York's Hudson Yards

Joey Haar — September 15, 2016 — Art & Design
References: heatherwick & archinect
Share on Facebook Share on Twitter Share on LinkedIn Share on Pinterest
The municipality of New York City is investing heavily in the revitalization of the Hudson Yards in Manhattan's Lower West Side, and the newly released renderings for 'Vessel' show that the area will be a boon for pedestrians. Conceived of by controversial British designer Thomas Heatherwick, Vessel is a 15-storey, honeycomb-shaped structure filled with 154 interconnecting flights of stairs that have no other purpose than to be climbed.

Vessel is a sort of vertical playground and park that maximizes the amount of public space in the revitalization of the relatively small Hudson Yards. Due to its hexagonal tiered configuration, Vessel will be worth climbing, with the promise of 80 different landings that each give slightly shifted views of the surrounding city.

Though Vessel will enclose a garden and atrium, the building will be neither commercial nor residential, with its sole purpose being to offer people space to move and interact.
4.4
Score
Popularity
Activity
Freshness
View Innovation Webinars