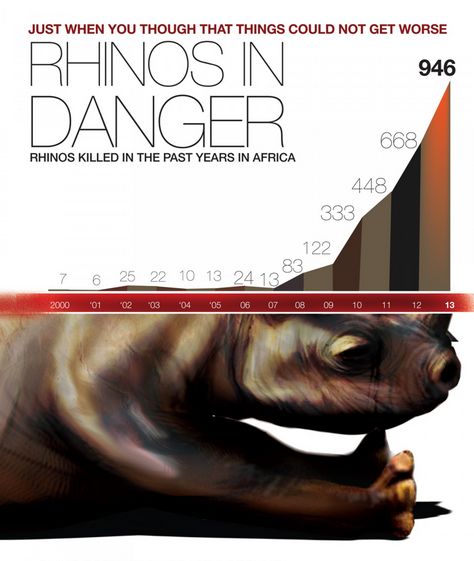 This Infographic Looks at Facts on the Endangered Rhino

Laura McQuarrie — February 25, 2014 — Social Good
References: memuco.deviantart & dailyinfographic
This infographic on the endangered rhino population sheds some light on just how fast these animals are disappearing. One of the most frightening parts of the 'Rhinos in Danger' graphic is the first graphic depicting the hunt of rhinos in Africa since the year 2000. Last year, the numbers got startlingly close to reaching 1,000, rising to 946. As the graphic points out, this is quite alarming, especially since South Africa is host to about 80% of the continent's rhino population.

In the last 10 years, Rhino poaching has caused the extinction of two rhino subspecies, totally wiping out the Javan and Black rhino populations in 2010 and 2011 respectively. The graphic by Guillermo Munro does a brilliant job at raising awareness on this heartbreaking reality.
4.4
Score
Popularity
Activity
Freshness