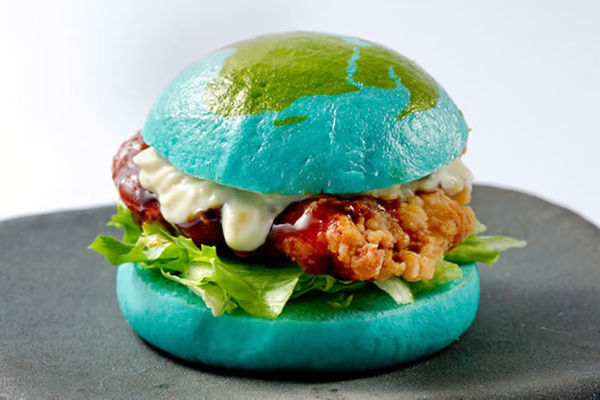 Laura McQuarrie — May 29, 2014 — Lifestyle
References: orbiearth.jp & gizmodiva
Share on Facebook Share on Twitter Share on LinkedIn Share on Pinterest
Typically blue is a color that's not very appetizing and one you definitely don't want to find on your food—however, in the case of the Blue Burger, it's pretty cool. The Blue Burger is made to be like an edible replica of the Earth, created by dying the bun blue, green and brown. On the inside, the strangely colored burger is filled with crispy chicken, lettuce, teriyaki sauce and mayo.

The Blue Burger was dreamed up in partnership with SEGA, as part of a nature-inspired menu for the BBC Earth's Orbi Yokohama Café. To order an Earth-like burger of your own to chomp out of, it'll cost you just under five dollars, which is hardly a price to pay to turn yourself into a giant destroyer of the solar system's planets.
6.2
Score
Popularity
Activity
Freshness
Get Trend Hunter Dashboard