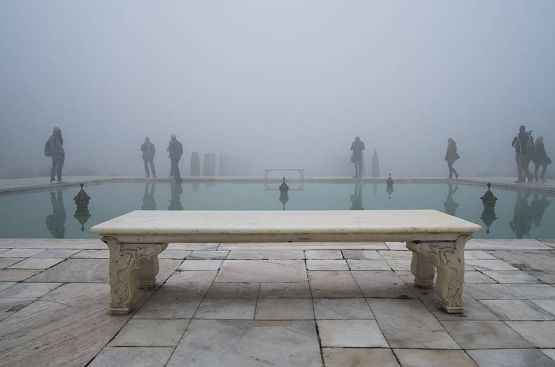 The 'Volte-Face' Series Showcases the Reverse of Famous Monuments

Hayley McGlone — July 20, 2016 — World
References: olivercurtisphotography & fubiz.net
Share on Facebook Share on Twitter Share on LinkedIn Share on Pinterest
Oliver Curtis posed as the anti-tourist for his Volte-face series of photographers. Curtis' series focuses on some of the world's most photographed and visited tourist sites like historic sites, buildings and monuments, but from the perspective of the monument. All of the photographs face away from the monuments and capture the moments that are rarely photographed at these world famous sites.

The series was taken over a period of four years and includes 24 images. The exhibition on the Volte-face series will be held at London's Royal Geographical Society. The sites include the Statue of Liberty (NY, USA), the Mona Lisa (Louvre, Paris, France), Lenin's Tomb (Moscow, Russia) and Christ the Redeemer (Rio de Janeiro, Brazil).

The photographs in the series are almost as captivating as the sites they were taken at. The alternative perspective offers a more quiet and reflective angle of world-famous monuments.
3.9
Score
Popularity
Activity
Freshness
Get Better and Faster