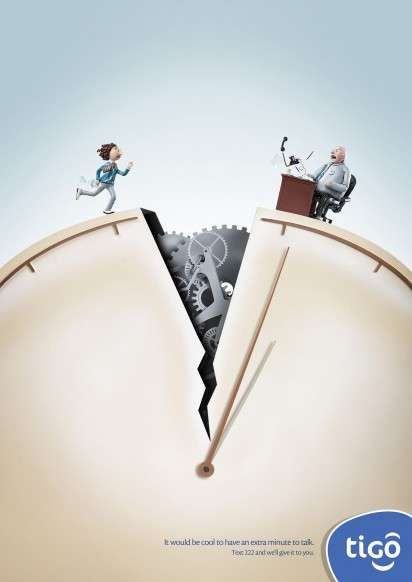 Meghan Young — April 13, 2013 — Tech
References: ibelieveinadv
Share on Facebook Share on Twitter Share on LinkedIn Share on Pinterest
If it's not broke, don't fix it; a saying that is all too true with the Tigo Paraguay campaign. A continuation of the company's summer 2012 ad campaign, these set of prints also feature cracked watch illustrations. These cracks create a large chasm that separates the main characters from their end goal, be it a first date, meeting with the big boss or the school bus.

Conceived and executed by Biedermann McCann, an ad agency based in Asunción, Paraguay, the Tigo Paraguay campaign reads, “It would be cool to have an extra minute to talk. Text 222 and we’ll give it to you.” It was art directed by Alejandro Rebull and Arturo Avalos with creative direction by Leonardo Matylski. The images were illustrated by Buena Mano realizaciones and photographed by Estudio Wallace.
2.3
Score
Popularity
Activity
Freshness
Get the 2021 Trend Report FREE