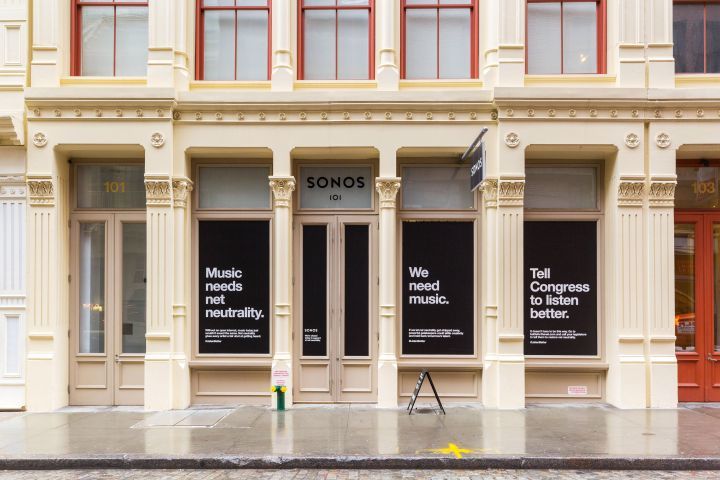 Justin Lam — January 30, 2018 — Marketing
References: refinery29 & adweek
Share on Facebook Share on Twitter Share on LinkedIn Share on Pinterest
Electronics company Sonos will be closing its flagship New York store in a powerful stance about the importance of supporting net neutrality. Partnering with Access Now, Future of Music Coalition, and Fight for the Future, this closing is meant to show music lovers the importance of net neutrality and to rally others to repeal the controversial rules set by the FCC. Joy Howard, CMO at Sonos, has explained her views on the subject and has explained the importance of supporting net neutrality for musicians and music lovers. Her arguments touch on the choice Internet users currently have and explains how important it is to maintain a free and open Internet.

The decision to promote net neutrality came as a means to strongly show the values of the company, and the choice in location was done in a deliberate manner as the Soho store as it would allow for plenty of publicity. Much of the signs plastered over the windows of the store direct people to battleforthenet.com, the current hub in the fight for net neutrality. Sonos is not the only brand to weigh-in on net neutrality, as Burger King also recently released an advertisement rallying against the FCC rules.
1.9
Score
Popularity
Activity
Freshness
Get the 2021 Trend Report FREE