The Chicago Spire
Next
Set of
Related
Ideas 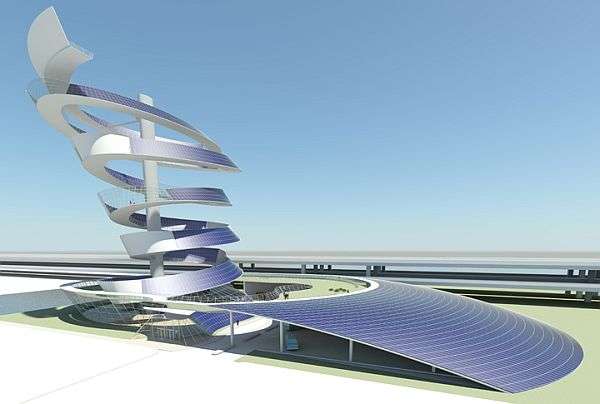 Michael Hines — April 17, 2011 — Eco
References: architizer & ecofriend
Share on Facebook Share on Twitter Share on LinkedIn Share on Pinterest
Thanks to the recent and ongoing economic downturn, the Chicago Spire has become a symbol of American economic futility, being delayed time and again until it was cancelled for good in December 2010. The Solar Spire is being proposed by Shortlist_0 Design Group LLC, Bill Caplan Architecture and Urban Design as a possible replacement project that would be both a wonder to look at and an eco-friendly power plant.

The Solar Spire would be a mixed-use building capable of producing a megawatt of power from its 5,000-plus solar panels. The spire would have be more than just a pretty building or power plant to look at. The designers also see the Solar Spire as a community building and have designed it as such by including space for an amphitheater, conference and exhibition area. With the economy slowly starting to turn around and green power growing more popular than ever, I wouldn't be surprised to see this tower get some serious consideration from the powers that be.
4.3
Score
Popularity
Activity
Freshness
Get Better and Faster