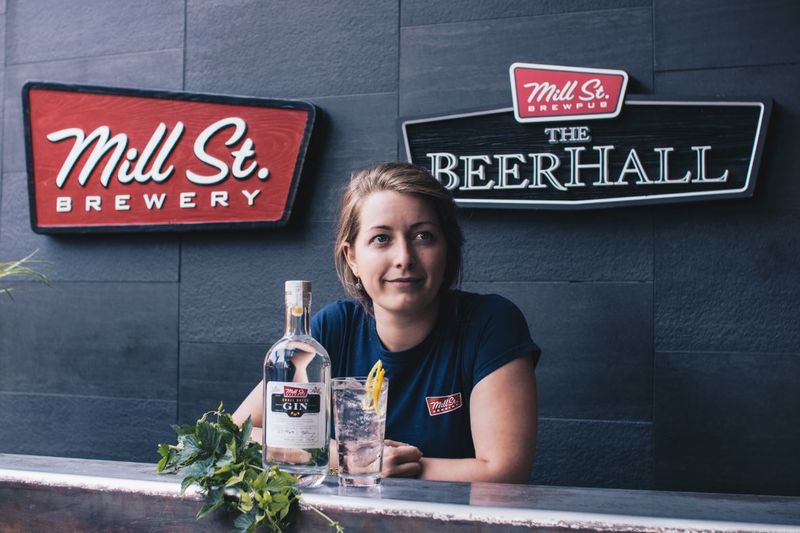 Joey Haar — August 28, 2017 — Lifestyle
References: millstreetbrewery
Share on Facebook Share on Twitter Share on LinkedIn Share on Pinterest
I wipe the first beads of sweat off my brow about thirty seconds into Martha Lowry’s breakdown. It’s 35 degrees Celsius in the compact, glass-enclosed distillery, where Lowry crafted her newly released Mill Street Small Batch Gin. But Lowry, Mill Street's distiller and Toronto's only female one, is accustomed to the heat -- while the still is active, her workspace at the Mill Street Beer Hall routinely reaches upwards of 50 to 55 degrees. If you don’t like the heat, don’t take up distilling.

The fun facts come in a flurry during my tour of the distillery room -- did you know that all spirits, even whisky, come out of the still clear, and they only gain color through barrel-aging? Or that vodka doesn’t actually have to come from potatoes? -- but I don’t complain when we step back into the Beer Hall. The temperature, coupled with Lowry’s thorough explanation of why they need to shut the distillery in blast-proof glass (concentrated ethanol is highly explosive), make the Mill Street’s bar and restaurant in the city's Distillery District a welcomed respite.

Moving over to our table, we get to the main event: a taste of the gin itself. After the pressure cooker of the distillery room, I’m having trouble imagining anything but a fiery drink. But Lowry’s skill and creativity as a distiller mercifully upend my heat-addled ideations. The Mill Street Small Batch Gin is exceedingly smooth and drinkable; there are fresh notes of citrus on the top and subtle hints of liquorice, but nothing so overpowering as to be unapproachable.

I won’t act as though I’m some expert with spirits (my typical interaction with gin consists of deciding whether I’d rather spend all night looking at a green bottle or a blue bottle), but for Lowry, that’s the point. Small batch spirits sound intimidating, and at just 500 total bottles, the Mill Street Small Batch Gin could suffer from that highbrow alienation. With her recipe, though, Lowry’s made a spirit that’s as appealing to spirit novices as it is to seasoned tasters. It has little of the alcoholic bite that one associates with liquor, and its flavors are subtle and intriguing enough to engage people over multiple drinks. Lowry’s also quick to note that it works just as well in cocktails -- she recommends a gin, honey syrup, and lemon drink called the Bee’s Knees.

After my tasting, I don’t doubt Lowry’s commitment to her craft. Not to rest on her laurels, though, she tells me about the meticulous decision-making process behind her search for ingredients, from hunting down Saskatchewan farmers for fresh coriander to consulting with Mill Street’s stable of brewers to mix the perfect blend of hops. Indeed, using hops in gin is itself a creative risk, one that Lowry might not have been sanctioned to take if she weren't working with Mill Street.

It’s raining outside during the tour and tasting, and while I’m happy to have some of my sweat washed away, I’m already thinking about when I can come back. The Small Batch Gin is available for purchase exclusively at the Mill Street Beer Hall, and knowing the quality, I’ll need to be quick.
7.1
Score
Popularity
Activity
Freshness
Get Trend Hunter Dashboard