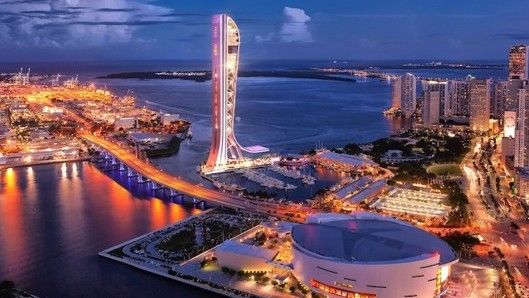 SkyRise Miami Will Host a Number of Terrifying Rides

Rahul Kalvapalle — September 10, 2014 — World
References: skyrisemiami & gizmag
Share on Facebook Share on Twitter Share on LinkedIn Share on Pinterest
SkyRise Miami is a 304-meter (1000-foot) high observation tower set to be built in Miami. The tower will also host a wide variety of attractions including bungee jumping, a free-fall ride and a cinema among other things. It will be the tallest tower in Florida once completed.

The tower will contain a private club, a trio of observation decks, a nightclub, a ballroom and a fancy restaurant. It will also feature a scary-sounding attraction called SkyRise Drop, that is likened to base-jumping but with a bungee rope.

SkyRise Miami is expected to attract 3.2 million visitors a year, with developer Jeff Berkowitz labeling it the "Miami Eiffel Tower". The tower will be situated in downtown Miami and is expected to cost $430 million to build, with construction scheduled to get underway later this year and be completed by mid-2017.
1.8
Score
Popularity
Activity
Freshness
Get Trend Hunter Dashboard