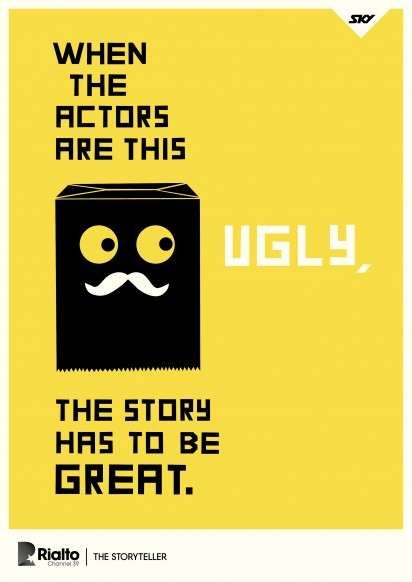 Meghan Young — July 10, 2013 — Marketing
References: ddb & ibelieveinadv
Share on Facebook Share on Twitter Share on LinkedIn Share on Pinterest
The Sky TV Rialto Channel ad campaign hilariously hones in on the importance of storytelling. For instance, one reads, "When the actors are this ugly, the story has to be great," while another one states, "If there's nudity, there's a really profound reason for it." All of the clever tag lines are paired with minimalist imagery that is just as entertaining, if not more.

Conceived and executed by the DDB ad agency branch based in Auckland, New Zealand, the Sky TV Rialto Channel ad campaign was art directed by Adam Thompson with creative direction by Chris Schofield. The eyeopening copy was written by Rory Mckechnie while the fun illustrations were created by Erica Harrison. Overall, the team put together a campaign that will captivate people in a playful way. Who wouldn't want to tune in?
1.5
Score
Popularity
Activity
Freshness
View Innovation Webinars