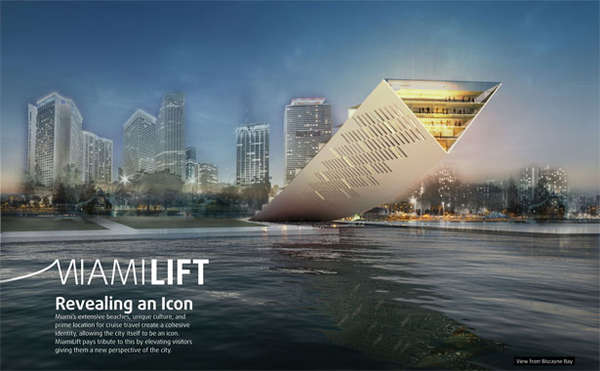 Michael Hines — June 1, 2013 — World
References: studiodror & tuvie
Share on Facebook Share on Twitter Share on LinkedIn Share on Pinterest
Studio Dror' Miami Lift has won the first prize in the 2013 Landmark Miami Competition. The competition was seeking a new landmark for the city's Bayfront Park. The winning design, Miami Lift, is essentially a curvaceous, multi-level observation deck. It would jut out over the water, providing a unique view of both the city and the bay.

In addition to providing a fantastic view of Miami, Miami Lift would also provide retail space, a theater, a restaurant, a media library and an exhibition hall. While the competition isn't officially sponsored by the city of Miami, you have to think that city planners have at least been paying partial attention to it. Miami, let's make this happen.
2.7
Score
Popularity
Activity
Freshness
Attend Future Festival Virtual