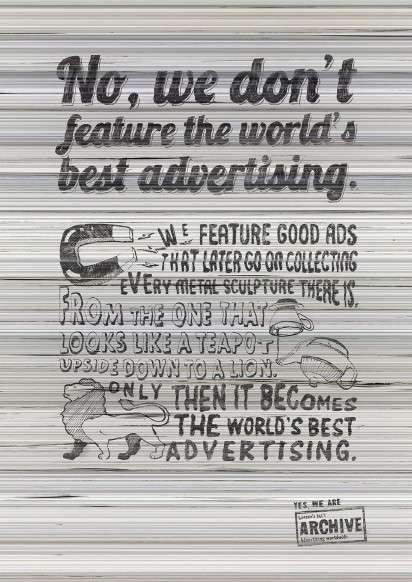 Meghan Young — April 11, 2013 — Marketing
References: facebook & ibelieveinadv
Share on Facebook Share on Twitter Share on LinkedIn Share on Pinterest
The Luerzer’s Int'l Archive campaign wants to set a couple of things straight. For instance, one reads, "No, we don't feature the world's best advertising. W feature good ads that later go on collecting every metal sculpture there is from the one that looks like a teapot upside down to a lion. Only then it becomes the world's best advertising." Similar passages are written in fun typography against a stack of papers, presumably the archived ads.

Created by Milk, an ad agency based in Vilnius, Lithuania, the Luerzer’s Int'l Archive campaign was art directed by Marius Kneipferavicius and Adomas Jazdauskas with creative direction by Rimantas Stanevicius. It was shot by photographer Alina Agarkova, illustrated by artist Vytis Vasiliunas as well as written by Antonio Bechtle and Rimantas Stanevicius.
1.2
Score
Popularity
Activity
Freshness
Get Better and Faster