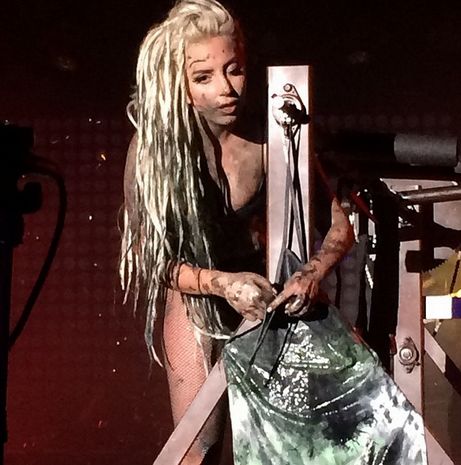 This Year's Lady Gaga SXSW Performance Was Really Quite Sickening

Laura McQuarrie — March 16, 2014 — Pop Culture
References: tmz & buzzfeed
Share on Facebook Share on Twitter Share on LinkedIn Share on Pinterest
This year's Lady Gaga SXSW 2014 performance was definitely a shocker, but not in the way we're used to being surprised by the eccentric pop star. Gaga is known to stun with her fashions, extravagant entrances and performances, but this one really made some stomachs churn.

During her performance of 'Swine' off of her latest album, Gaga had a girl chug some gross green liquid, shove her fingers down her throat and then proceed to throw up all over Gaga intentionally during the performance.

Although Gaga's latest album 'ARTPOP' is all about the fusion of art and music, it's pretty hard to see a combination of the two during this SXSW performance. However gross it may be though, Gaga still continues to find new ways to shock and get people talking about her crazy limit-pushing antics.
2.5
Score
Popularity
Activity
Freshness
Get the 2021 Trend Report FREE