The Beach Bar Experience
Next
Set of
Related
Ideas 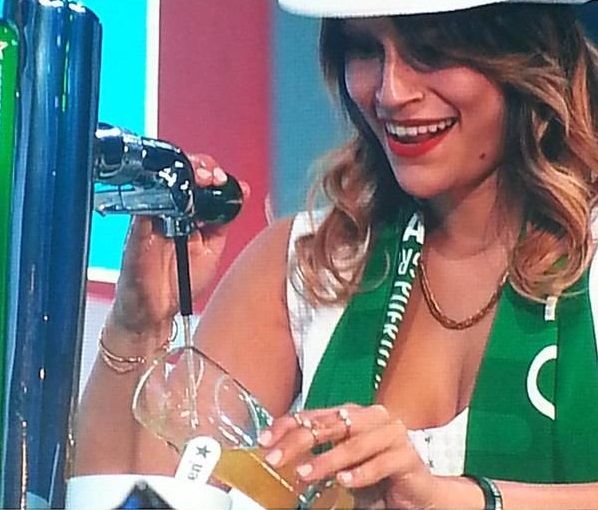 Gil Haddi — April 28, 2015 — World
References: heineken & facebook
Share on Facebook Share on Twitter Share on LinkedIn Share on Pinterest
Arriving in Amsterdam in anticipation of the Heineken Global Bartender Final 2015, I found myself in the contagiously enthusiastic company of the greatest bartenders from countries all over the world. Each one had previously taken part in their respective regional finals, including Saida Schipdam whom I was lucky enough to watch win the Heineken Dutch Bartender Final 2015 this past month. While the regional experience was thrilling to take part in, it was nothing compared to what Heineken had in store for us in the day to come.

Day 1:
Shortly after checking in to our rooms at the prestigious DoubleTree Hilton, room service surprised us with cool bottles of refreshing Heineken, along with branded glasses and bottle openers, giving us a mini personal pouring experience right off the bat. Thus, with the sweet taste of Heineken on our lips, the Amsterdam adventure had begun. Our first night consisted of a delicious dinner at the stunning Sky Lounge where we could see the city in its entirety as we mixed and mingled, breaking bread with the contestants and their team members. Watching the Champions League Game with some cold brews in hand enhanced the camaraderie of everyone in attendance as we concluded the night.

Day 2:
Marking the official day of the Heineken Global Bartender Final, there was a buzz in the air and even those who were relaxed before started to feel the anticipation. The day's events started bright and early with a trip to the Heineken Experience where we learned the history of the brand and even got to feel for ourselves what it was like to be bottled and brewed to the Heineken standard. We got to visit several local bars that were steeped in rich Amsterdam history and Global Heineken Marketing Activation Manager Koen Morshuis gave us a rundown of the strong passion for quality at Heineken, "it's in the DNA of not only our brand, but our entire company," he explained, "and we don't want to let that go when it comes to serving the consumer." By implementing the Star Serve Program, which designates the perfect way bartenders must pour and serve Heineken to the customer, the brand is able to "maintain high quality throughout the beer's journey, from brewery to bar, from tap to table."

After a delightful day of tasty treats, boat riding and sightseeing all while drinking Heineken throughout, everyone was more than ready for the night's competition to commence.

Star Factor:
At first, I was deeply invested in a few favorite contestants, but as I got to know the participants, I quickly realized that all contestants were equally deserving of winning the title of Heineken Global Bartender Final 2015 champion. When asked what he would be looking for when judging the competition, Judge and Global Draught Master Franck Evers boldly stated "I will be looking for mistakes. Everyone here is already so good, I will need errors to eliminate people and find a winner." True enough, the competitors had already demonstrated their pristine technical skill, that's why there was extra emphasis on Star Factor, as host Pep Rosenfeld explained it, "that little something extra that only the best bartenders have." In that vein, all contestants submitted a video which played on screen just before each one came on stage to the roaring applause of their friends and supporters - a fun and light-hearted way to start the first round.

Round 1:
Filling up the Undercurrent Bar, over 150 people join to watch as each contestant, their home country's flag flying proudly behind them, pours expertly without missing a single step in the 5-point pouring technique. Judged on their rinse, pour, skim, check and serve, the 18 contestants were given an initial score out of 120, with Jeff Fajardo from Hong Kong generating a near perfect score of 100! Furthermore, the top 7 scores by the end of round one ranged from 96-100. This was clearly going to be a close match no matter what. During my interview with judge and the last Heineken Global Bartender Final champion Sander Veenendaal, he reiterated the importance of not only the perfect pour but also the perfect serve, "the beer is only perfect when it's served the right way, with a smile and personality, that's really what we're searching for."

Round 2:
Second round was a sudden-death match between the last 11 contestants, who didn't score in the top 7, to battle it out head-to-head and claim the 8th place. With vuvuzelas blasting, music pumping and the crowd cheering and cheersing in multiple languages, the excitement in the venue was palpable. Finally, Eleni Kalfadimou from Greece emerged as the sole survivor moving on to the third round. I got a few moments to speak with her and she described her excitement to me "at first I was nervous, but now I'm cool and calm. Let's enjoy this and have fun." She went on to describe the instant friendship between the competing bartenders, "It's great to feel the energy from other countries and other cultures." I asked her how she plans on winning the finals and her advice to everyone was "to stay cool, enjoy and remember that energy is the key."

Round 3:
Getting incredibly heated, the third and final round started off with a smash, literally. As nerves and tension built up through every round, it didn't even come as a shock when one of the competitors smashed their glass on the ground at the start of round 3. While they didn't continue, I was happy to see that all 4 female contestants had made it to the finals and I was hoping one would win the entire competition. At the very end, the enigmatic Michele Doria from Italy and the glamorous Olga Lisovaia from Russia were the last two bartenders standing. When the winner was announced, the entire crowd was swept up in roaring applause and clamouring cheers because everyone celebrated in the success of the Heineken Global Bartender Final 2015 champion Olga Lisovaia.

Bedecked in a floor-length red dress, Olga had won over the audience just as she had won over the judges with her dazzling Star Factor. Catching up with her back at the hotel, after the masses and the cameras had swarmed her with praise, Olga breathlessly told me that she couldn't put her feelings into words. With nothing but praise and respect for her fellow competitors, Olga simply stated "I'm just so happy right now."