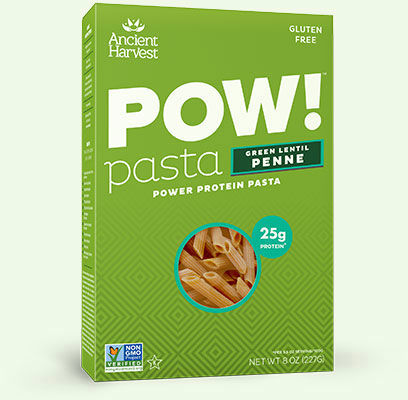 Ancient Harvest's Healthy Pastas are Made from Beans and Lentils

Laura McQuarrie — September 23, 2016 — Lifestyle
References: shop.ancientharvest & trndmonitor
Share on Facebook Share on Twitter Share on LinkedIn Share on Pinterest
In place of noodles that are made with wheat or grains, Ancient Harvest makes its healthy pastas with a base of black beans, colorful lentils and ancient grains. Even though different bases are used, these plant-based pastas retain traditional shapes such as elbows, rotini, penne, spaghetti and linguini.

These healthy pastas are naturally gluten-free, as well as loaded with fiber and two times the amount of protein that can be found in traditional pasta products. These POW! Pastas come in brightly colored boxes that suggest the vibrancy of the pulse-powered foods inside.

Earlier this year, the UN General Assembly declared 2016 the International Year of Pulses, since they tend to be inexpensive, rich sources of nutrition and cater to those with diets that specifically require no gluten or high amounts of protein and fiber.
1.6
Score
Popularity
Activity
Freshness
Access Advisory Services