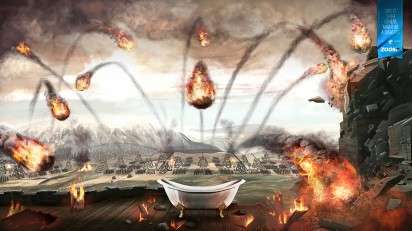 Meghan Young — April 11, 2013 — Marketing
References: zeabbdo & ibelieveinadv
Share on Facebook Share on Twitter Share on LinkedIn Share on Pinterest
The Grupo Zoom campaign likens group deliveries to war zones. Full of exploding bombs, unleashed arrows and catapulting rocks, the scenes are absolutely epic. Amidst all the chaos and destruction are fragile items such as a porcelain vase, stained glass lamp and clawed foot bathtubs. Since they would have to be extremely valuable to elicit such a violent response, the images clearly represent something else.

The Grupo Zoom campaign reads, "Ship it with others may be a disaster." Hence it encourages a different method. Conceived and executed by ZEA BBDO, an ad agency based in Caracas, Venezuela, the Grupo Zoom campaign is so full of action, it will grab anyone's attention. It was imaginatively art directed by Roberto Mondello with aggressive illustrations by artist Antonio Aponte.
2.7
Score
Popularity
Activity
Freshness
Get the 2021 Trend Report FREE