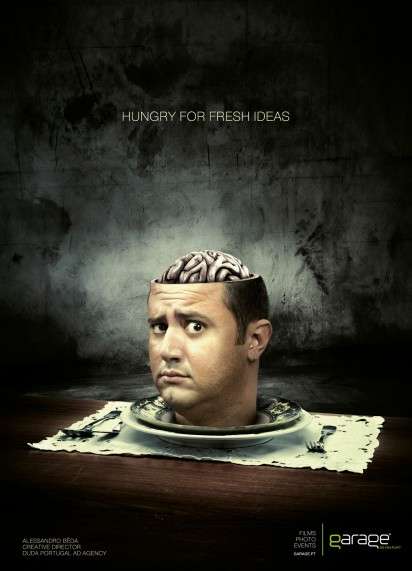 Meghan Young — December 30, 2011 — Marketing
References: thegarageinc & ibelieveinadv
Share on Facebook Share on Twitter Share on LinkedIn Share on Pinterest
People may not know this, but brains need to be fed as often as tummies and the Garage Films Photo Events ad campaign shows the best meal to satisfy hungry brains: Fresh ideas. Without fresh ideas, brains become sluggish and sedentary, which is not good for societies that wish to be as productive as possible.

The Garage Films Photo Events ad campaign, which happens to be created by their very own talented Lisbon-based team, centers around some disturbing images. As though shot for the Halloween season, it features several severed heads on platters with their brains exposed. Photographed by Frederico Van Zeller, who was also the 3D artist, and Rogerio Serrasqueiro, the images send a shocking message that nevertheless gets their point across.
3.8
Score
Popularity
Activity
Freshness
View Innovation Webinars