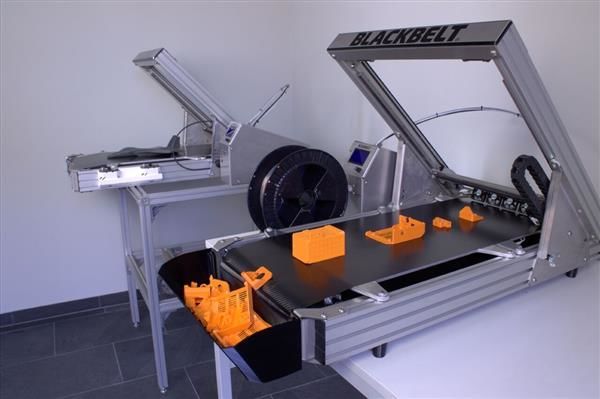 Laura McQuarrie — May 12, 2017 — Tech
References: 3ders.org
Share on Facebook Share on Twitter Share on LinkedIn Share on Pinterest
Blackbelt 3D recently shared details on its newest conveyor belt printer, which includes a conveyor belt within its own design. The integration of a conveyor belt within this 3D printer is an essential part of the machine, which has the ability to create belts of unlimited length.

The system, which is soon to be launched on Kickstarter, is being called a "new type of industrial production machine," and it has the potential to reshape the way both long and short conveyor belts are crafted.

Once the machine has finished producing a 3D-printed conveyor belt, a container stationed at the end of the machine catches the piece, which means that the machine can be left completely unmanned.
5.4
Score
Popularity
Activity
Freshness
Jeremy Gutsche Keynote Speaker