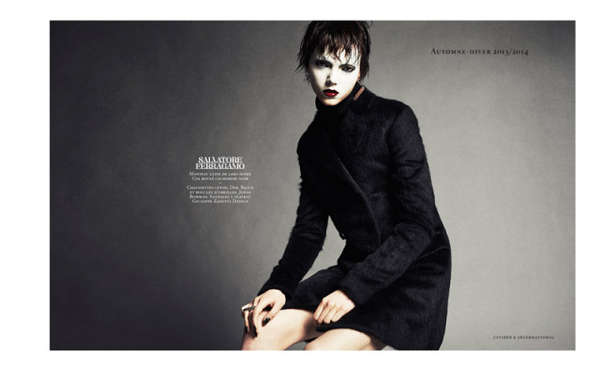 Meghan Young — July 4, 2013 — Fashion
References: citizen-k & fashiongonerogue
Model Jenna Earle appears to be channeling her inner mime for the Citizen Kane Issue 62 editorial. From her moody expressions to the white paint on her face, she glamorizes the profession beautifully. Of course, she does so with the help of Anne Raybaud, who clad her in an elegant and chic wardrobe featuring pieces from the likes of Salvatore Ferragamo, Roberto Cavalli and Kenzo. Raybaud focused primarily on moving away from summer colors for fall.

The Citizen Kane Issue 62 editorial was shot by photographer Honer Akrawi. The Canadian beauty was captured in studio against a dark grey backdrop, which adds even an even more somber tone to the photoshoot. The looks were perfected by hairstylist Javier Palacio and makeup artist Caroline Saulnier.
4.6
Score
Popularity
Activity
Freshness