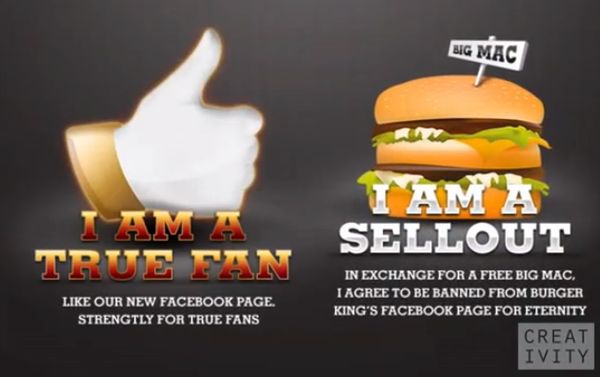 Laura McQuarrie — January 9, 2014 — Marketing
References: learnedmedia & creativecriminals
Share on Facebook Share on Twitter Share on LinkedIn Share on Pinterest
This Burger King Facebook campaign takes quite an unusual approach to social media. Burger King Norway had a whopping 38,000 fans on Facebook, but due to its high number of free giveaways, many of these users were just trolls, including people who were fans of other fast food restaurants, but would lurk and jump at the chance for a free Burger King burger.

In order to determine who its real fans were, Burger King Norway devised the ‘Whopper Sellout,’ a campaign that gave its Facebook fans two options: become a fan of its new Facebook page, or get a free burger.

People who opted to “sell out” received a voucher for a free burger plus a letter from Burger King bidding them farewell, since claiming the free burger came with the consequence of being banned from Burger King Norway’s Facebook page permanently. Burger King lost over 30,000 followers, but is quite content with its 8,481 loyal fans who wouldn’t give up the Whopper for anything.
5.5
Score
Popularity
Activity
Freshness
Jeremy Gutsche Keynote Speaker