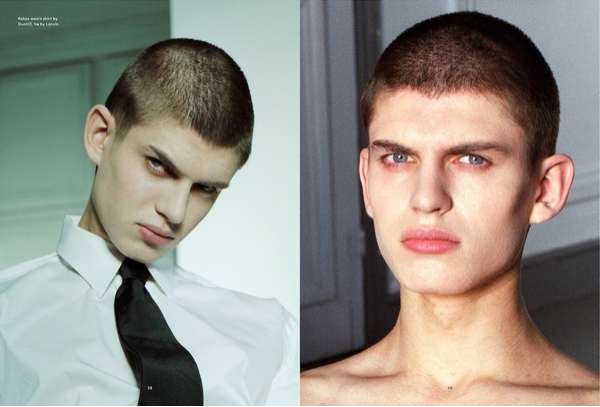 Brett Lloyd Shoots to Kill with His Latest Work

John Ibbitson — February 26, 2012 — Fashion
References: boylloyd & re-belmagazine
Share on Facebook Share on Twitter Share on LinkedIn Share on Pinterest
Photographer Brett Lloyd teams up with stylist John McCarty to bring you this new fashion editorial from Issue five of RE-BEL ISSUE magazine. The photo series stars models of many hats, literally, posing in some of this year’s most desired designer pieces, suited separates and outerwear.

The images seem to have a bad cop, good cop theme, and present their male models in some seductive but subversive poses. A shot of a young man wearing a blue puffer coat, and what looks like police riot gear, while lying on the ground and staring back at the camera suggestively is only one such example. In another capture, a man wearing a hat that more traditionally resembles police head wear can be seen standing in an empty room while leaning on a used mattress up against a wall. These images from Brett Lloyd definitely give this curated selection of fashions a story. The only question is, are you feeling naughty enough to make it your own?
2.2
Score
Popularity
Activity
Freshness
Access Advisory Services