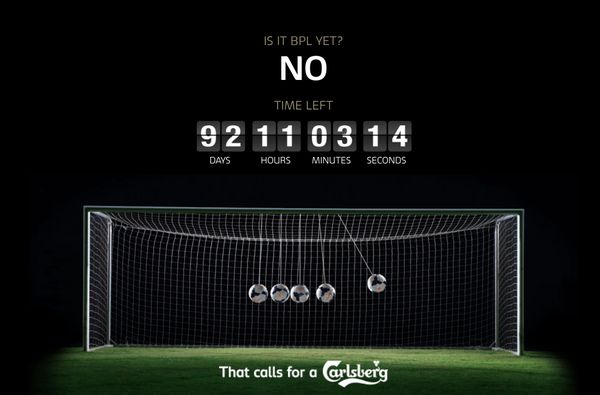 Carlsberg Counts Down with Fans Who Are Wondering: Is It BPL Yet?

Laura McQuarrie — May 15, 2014 — Marketing
References: isitbplyet.tumblr & adverblog
'Is it BPL Yet?' is a single-serving site from Carlsberg that was designed to empathize with fans now that the Premier League season in the UK is over. With no more matches to keep fans occupied, for some, the second best thing to do is count the days, hours and minutes until it's game time again.

The 'Is it BPL Yet?' site set up on Tumblr hosts a countdown that takes the form of sports score cards and beneath it is a Newtons Cradle made from soccer balls, monotonously swinging back and forth.

Without saying very much else, the site displays the beer's tagline, 'That calls for a Carlsberg,' which will also come in handy in just about 90 days or so, when the Premier League season is back on.
3.1
Score
Popularity
Activity
Freshness