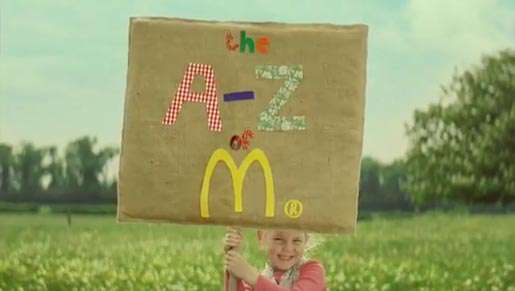 The McDonald's 'A to Z Campaign' Does Damage Control

Jordan Sowunmi — July 27, 2011 — Eco
References: a-z.mcdonalds & theinspirationroom
For years McDonald's has taken a beaten in the mainstream media for its lack of nutritional value and rumors of genetically modified foods, and their new McDonald's 'A to Z Campaign' strikes back at those critics.

McDonald's, one of the major sponsors of the 2012 London Summer Olympic Games, tapped Leo Burnett to develop an ad integrated ad campaign to convince parents in Europe that the company uses healthy, homegrown food, is socially responsible, keeps a well-trained staff, and is committed to strengthening local communities.

The McDonald's 'A to Z Campaign' ad features an expert voiceover extolling the virtues of the brand's food, economic support of the community, and environmentally friendly way of business. The 'A to Z Campaign' shows children, farmers and parents joyously interacting while playing in a field.

The campaign also features print, Internet, in-store, and truck ads, all running concurrently and available to the public now.

Implications - In the last few years, an increased importance has been placed on products that are health-conscious and environmentally friendly. A company can capitalize on this movement by investing in marketing that explicitly extolls the virtues of the company's eco-creations and the purity of their food. This shows consumers the company is committed to adapting to the 21st Century's leading problems, and engenders goodwill from concerned consumers.
3.6
Score
Popularity
Activity
Freshness