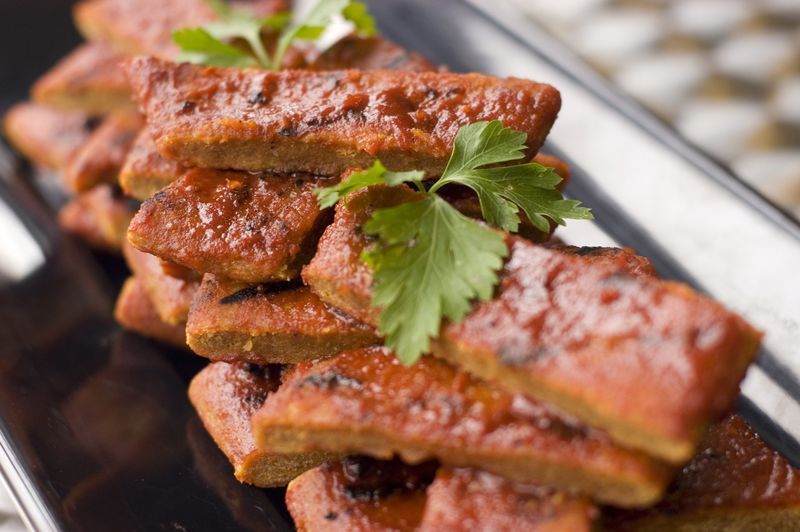 'From the Kitchen of YamChops' Shares Secrets of Vegan Butchering

Joey Haar — April 27, 2018 — Lifestyle
References: a.co & yamchops
Share on Facebook Share on Twitter Share on LinkedIn Share on Pinterest
'From the Kitchen of YamChops' is a new cookbook that seems like a paradox. Its recipes include takes on smoked salmon, chicken schnitzel, crab cakes, beef wellington, and burgers, yet every single dish is completely vegan. That's because the book was written by Michael Abramson, head chef and founder of the eponymous YamChops, North America's original plant-based butcher.

YamChops opened its flagship location in Toronto, and its meat-free yet meaty dishes have proven popular among consumers increasingly concerned with the impact that meat- and dairy-heavy diets have on both their bodies and the environment. Thanks to that popularity, the butcher plans to open more locations in the future, including expansions to Vancouver and Edmonton.

There are 75 recipes in 'From the Kitchen of YamChops', all of which are hearty, healthy, high-protein, and meat- and dairy-free. These include meatless mains like 'Chick*n Schnitzel' and 'Pulled BBQ Jackfruit & Carrot', appetizers like 'Carrot Lox' and 'Tunaless Tuna Salad', and dairy-free desserts like 'Chocolate-Banana Cream Pie'.

The new cookbook is now available online through YamChops' website and on Amazon.
5.4
Score
Popularity
Activity
Freshness
Get the 2021 Trend Report FREE