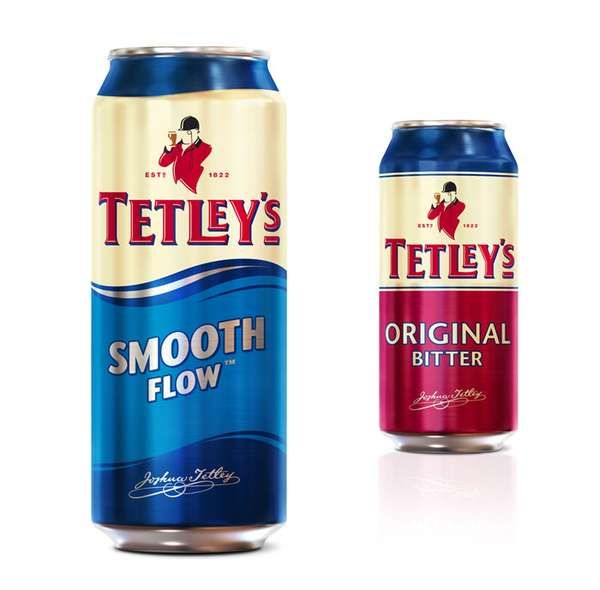 Susan Keefe — December 13, 2011 — Lifestyle
References: wpa-pinfold & thedieline
Share on Facebook Share on Twitter Share on LinkedIn Share on Pinterest
Tetley's Ale takes on a package redesign handled by the creative minds behind the design house wpaPINFOLD. As store shelves continues to flood with a wide assortment of ales, longstanding favorites have been dethroned as such and have been fighting to reclaim their sizable share of the market. Unfortunately this was the case with the long running brand Tetley's Ale. Hoping to return to the top, Tetley's Ale began sporting this simplified and decidedly modern reinterpretation of the company's original packaging.

The brand continues to favor its iconic mascot, the Tetley's huntsman, to emphasize the company's impressive lineage. This incarnation of the huntsman lacks definition, instead it emphasizes the patriotic coloring of his dress and his tell tale monocle. The use of slightly modernized typography and the new and improved image of the mascot creates packaging that looks back fondly on its past, while still maintaining all the forward momentum of an emerging and invigorated brand.

Simplistic in styling and quietly patriotic, Tetley's Ale wpaPINFOLD packaging proves the company still has a few tricks up its sleeve.
2.4
Score
Popularity
Activity
Freshness
Get the 2023 Trend Report FREE