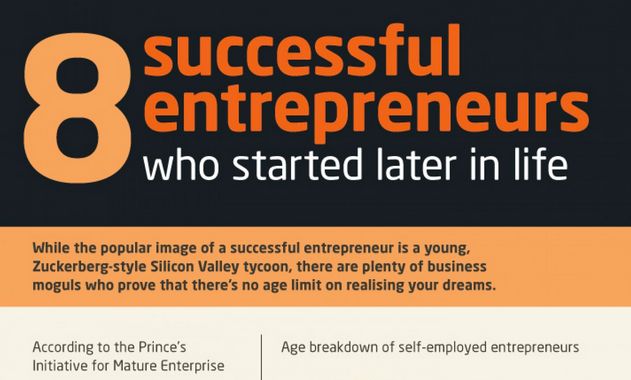 Misel Saban — October 7, 2015 — Marketing
References: keyretirement & visual.ly
Not all success stories happened early on in life as proven by these wealthy individuals listed in the '8 Successful Entrepreneurs Who Started Later in Life' infographic. The chart shares half a dozen success stories that hit it big much later on in their lives, showcasing that virtually anyone can make it big any time in their livelihood.

Finding success isn't a measurement that should be made by how long it takes to achieve as this infographic shows. While there are hundreds of individuals that make it big in their youth, many well-known entrepreneurs make it big in their late 40s, 50s and even 60s. The chart lists a few of these famous faces and facts about them including Harland Sanders of KFC, Ray Kroc of McDonald's, Chaleo Yoovidhya of Red Bull and Stan Lee of Marvel Comics.
6.6
Score
Popularity
Activity
Freshness