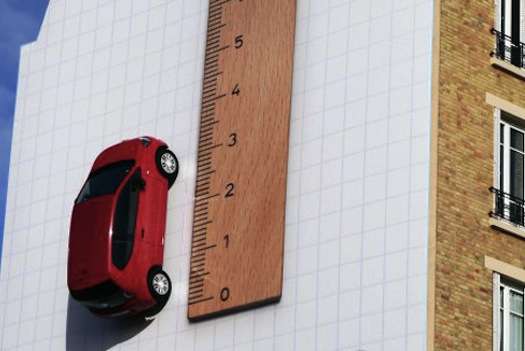 The Volkswagen Up! Outdoor Campaign is Creative & Cute

Katherinev123 — January 13, 2012 — Autos
References: volkswagen-up & psfk
Share on Facebook Share on Twitter Share on LinkedIn Share on Pinterest
Big things often come in small packages, which is precisely what Volkswagen wants car buyers to recognize with its latest Volkswagen Up outdoor campaign. The campaign comprises a large outdoor billboard on the side of building, which features the Volkswagen Up alongside a giant ruler.

Created by Agency V and JCDecaux, the outdoor campaign was launched in France to promote the new Volkswagen Up, a small and compact auto that was designed for people living in urban environments. The creative billboard ad definitely goes with the automaker's French tagline, "C’est grand d’être petit," which as PSFK translates, means "It's great to be small."

The Volkswagen Up campaign is just one of the many creative marketing initiatives the auto brand has embarked on over the last several months. Recently, it launched an augmented virtual showroom that Singapore-based consumers could access via their iPhones.
2.7
Score
Popularity
Activity
Freshness
Get Better and Faster