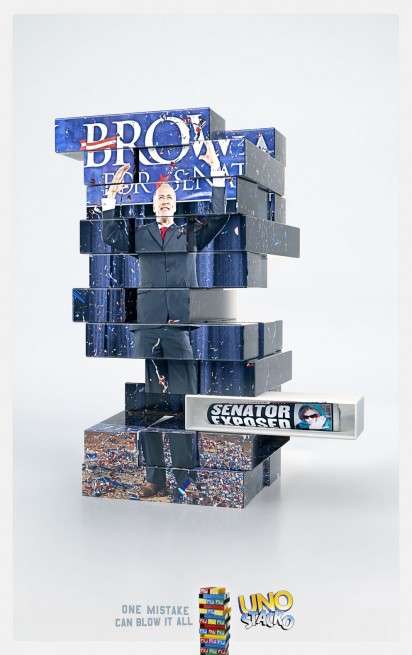 Meghan Young — April 13, 2011 — Marketing
References: ogilvy & ibelieveinadv
Share on Facebook Share on Twitter Share on LinkedIn Share on Pinterest
The Uno Stacko ad campaign puts a rather serious spin on an otherwise light-hearted and fun game. Of course, it is all about competition, especially with another game known as Jenga. Therefore, the Uno Stacko campaign not only sets the tone for the game itself, but it also sets it apart from the original Jenga game.

Conceived by the Ogilvy & Mather agency based in Bogotá, Colombia, the Uno Stacko ad campaign centers around the slogan "One mistake can blow it all." This statement is illustrated in three print ads showing an exposed senator, a pregnant beauty pageant winner and a drug-abusing cyclist.