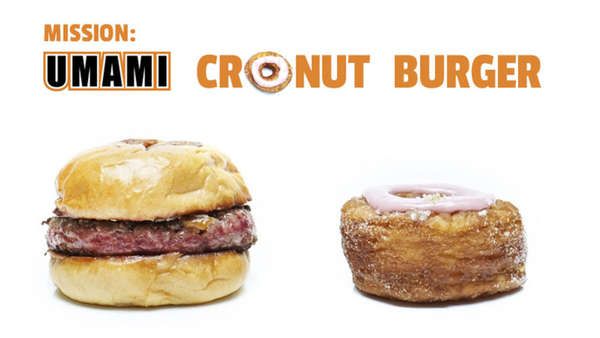 This Frankenstein Creation Combines the Cronut and Umami Burger

Alyson Wyers — August 1, 2013 — Lifestyle
References: umami & firstwefeast
Share on Facebook Share on Twitter Share on LinkedIn Share on Pinterest
First We Feast intern Matthew Schonfeld recently combined a Luther burger, a cronut and a Umami burger. According to First We Feast, a Luther burger is a “burger variant of disputed origins that uses glazed donuts in the place of a bun.” The culinary creation known as the cronut is a croissant and donut hybrid originally crafted by chef Dominique Ansel. Umami Burger is a well-known West Coast chain and cult favorite that recently opened its first New York store.

To come up with the Umami-Cronut-Burger, Schonfeld went not only to the New York location on opening day, but also went to the source and purchased cronuts from Ansel’s bakery. Schonfeld made a horizontal incision into the cronut, careful not to make too much of a mess with the custard and blackberry filling. He then supplanted the patty onto the cronut bun. Afterwards, he claimed the flavors complemented each other and he was proud of what he’d accomplished.