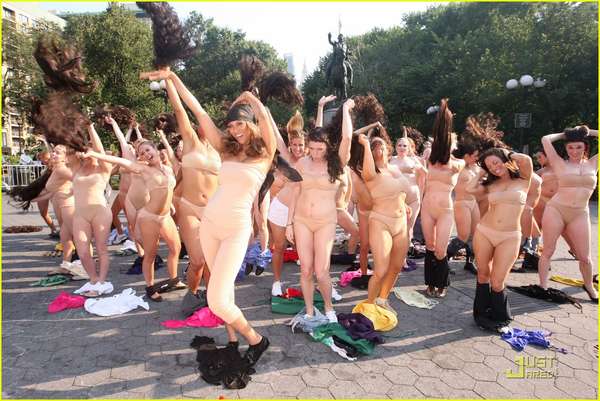 Katherinev123 — August 22, 2009 — Marketing
References: tyrashow.warnerbros & justjared.buzznet
Share on Facebook Share on Twitter Share on LinkedIn Share on Pinterest
Not many have seen Tyra Banks’ real hair, but on August 18th a crowd of pedestrians in New York City’s Union Square sure did. The 35-year-old model, actress and business mogul led a mob of females in stripping themselves down to flesh-toned body suits and chucking away their weaves.

If you didn’t happen to be in Union Square that day, don’t fret. You’ll get to see what Tyra Banks looks like minus her weave on the Season 5 premiere of the "Tyra Banks Show," which airs September 8 at 4PM ET/PT on CW.

This is the day Tyra Banks will debut her “natural hair,” essentially trading in her trademark weave to encourage ladies around the world to “own and rock what they’ve got” and embrace, well, what their mamas gave them.

Naturally, a pseudo-holiday had to be created. September 8th will be, as Tyra Banks declares, “National Real Hair Day.”