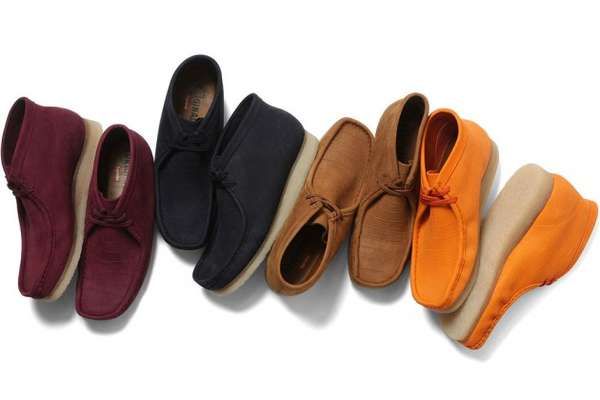 Trenton Millar — October 15, 2012 — Fashion
References: supremenewyork & highsnobiety
Share on Facebook Share on Twitter Share on LinkedIn Share on Pinterest
The Supreme Clarks Wallabee Boot is an awesome collaboration between Supreme and Clarks. These boots are made from suede that has been embossed with a crocodile print pattern. The subtle touch of crocodile really elevates these shoes above the multitude of similarly styled suede boots for the Fall/Winter season.

The Supreme Clarks Wallabee Boot will come in four different colorways: purple, tan, yellow and navy. You can find them starting October 18th at Supreme New York, LA, and London. They will also be released online, and on October 20th, they will be released in Japan.

Having the option between the more neutral colors of tan and navy or the bright purple and yellow hues gives people the choice of something flashy or something more subdued. Either way, you get the crocodile print, and that's the best part.
5.1
Score
Popularity
Activity
Freshness
View Innovation Webinars