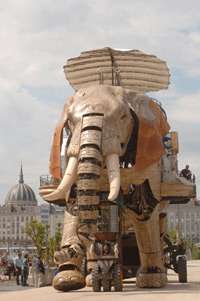 Implications - Some of the pieces seem surprisingly lifelike, and it's amazing to think about how much time and effort had to go into each one. The giant creations are a combination of gear wheels, hydraulics and moving parts. They were built at a workshop that now occupies the former site of Nantes' docks, but it goes without saying that they will bring in a large amount of tourism to the city on account of their bizarre nature.
5.5
Score
Popularity
Activity
Freshness