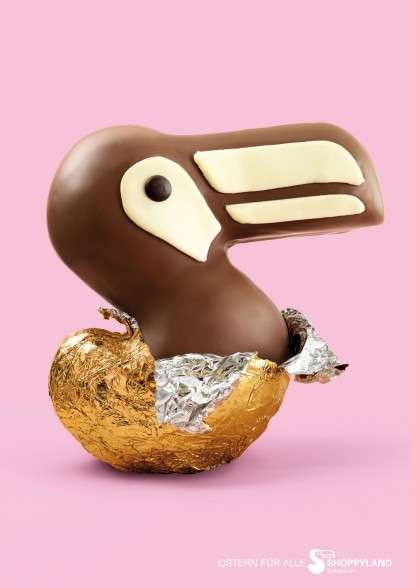 Meghan Young — January 24, 2013 — Marketing
References: shoppyland.ch & ibelieveinadv
Share on Facebook Share on Twitter Share on LinkedIn Share on Pinterest
The Shoppyland Schonbuhl campaign playfully incorporates the shopping center's logo of a Toucan into it. An adorable and recognizable bird, especially for those who have an undying love for the Fruit Loops cereal, it is only natural that the ad agency behind the print ads would use it. Instead of putting the bird into different scenarios, however, the Shoppyland Schonbuhl campaign turns it into different objects itself including some chocolate, a popsicle and a candle.

Created by Switzerland-based KOMET, the Shoppyland Schonbuhl campaign does this to signify different season events such as Easter, Christmas and Summer. It basically shows people that the mall has everything anyone needs during those times. The posters were art directed by Roland Zenger and Joël Weber with graphic design by Natalia Funariu.
1.6
Score
Popularity
Activity
Freshness
Access Advisory Services