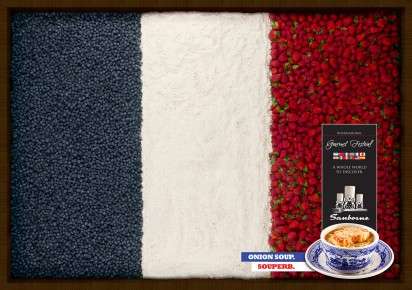 Meghan Young — January 24, 2013 — Lifestyle
References: ibelieveinadv
The Sanborns International Gourmet Festival will be celebrating worldly cuisine and has commissioned an ad campaign that will best represent this delicious event while also whetting people's appetites enough to get them there. It centers around four different flags, all of which have been formed with food. For instance, the Japanese flag is made out of rice and fish eggs while the Italian flag features green peppers, fettucini pasta, mushrooms and tomatoes.

Conceived and executed by Grey Dot, an ad agency based in Mexico, the Sanborns International Gourmet Festival ad campaign was art directed by Israel Arrieta and Jorge Bobadilla with creative direction by Damián Campa. The creative and colorful images were shot by photographer Virro Borja.
3.8
Score
Popularity
Activity
Freshness